The two strong women achievers speak up about why they raised their voice against gender role discrimination and laud Zee TV for its attempt to address this pertinent subject through its upcoming show, Meet

Recently, many of us came across a video of a ‘Tauji’ on social media expressing his problematic views on gender roles, advocating patriarchy and speaking of what a man’s prerogative is versus a woman’s. While his staunch, sexist views ensured that the video began to spread like wildfire across WhatsApp groups, creative netizens began making comical memes mocking his bigotry. What was disconcerting, however, were certain sections of society that actually agreed with Tau ji and gave him high-fives! 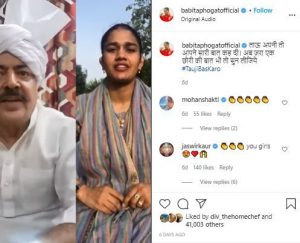 Speaking on behalf of every woman who has been fighting this gender stereotype, Babita said, ‘Tauji ki yeh soch samaaj ke liye haanikarak hai’, prodding him to come out from under his rock and see the real power of women today. Thousands of her fans came out in full support of their dhaakad idol and waged a war of words against Tau ji!

Huma, on the other hand, took the route of wit and humour and posted a sarcastic reel on Instagram calling out his narrow-minded outlook and defying these gender stereotypes, giving her own example of being the quintessential ghar ka chiraag, a tag Tauji and his tribe are happy to only restrict to the sons of their house.

Within a matter of hours, #TaujiBasKaro and #TasksSeeNoGender began trending with a deluge of people sharing their views on gender roles, most people lauding Babita and Huma for having taken a stand against gender discrimination. With the decibel of buzz on the topic at its peak, Huma revealed that while the Tauji video was a social experiment orchestrated by Zee TV to draw attention to this disturbing mindset still prevalent in society, she being a firm believer of gender equality, knew she had to join in and raise her voice against Tauji’s views. The actress then went on to laud Zee TV on their attempt to address this pertinent subject through its upcoming show Meet.

Huma Qureshi said, “It seems like Tauji’s views on gender roles haven’t evolved over the past couple of centuries. While he may be a fictional character, he represents the views of countless families who, even today, believe that a woman’s place is in the kitchen and a man must fulfil all otherworldly responsibilities. Sad but true! I’m really happy Zee TV took the initiative to address this issue through the mechanism of Tauji and when I saw how this extremely relevant topic was being pulled forth for discussion, I knew I had to take a stand. My parents have never differentiated between my 3 brothers and me. Be it changing lights during Diwali, preparing Biryani during Eid or taking care of the finances, we were always all equally responsible.It’s good to know that the channel is all set to present the story of Meet, where a spirited girl from Haryana will prove yet again that girls can very well be the “ghar ka chiraag”, taking complete charge of a household. I am looking forward to watching the show and I wish them all the luck for their new venture.”

Babita Phogat added, “Tauji’s video with his problematic views on gender roles that went viral recently was a small attempt by Zee TV to bring forth a very pertinent subject for discussion and since I have strong views on the matter, I knew I had to take a stand. I’m very happy Zee TV is beautifully addressing this sensitive topic in its next fiction show, Meet, where a spirited girl from Haryana, just like me, is about to shatter gender stereotypes and make us realize that girls can be the ghar ‘ki’ chiraag too. As the show’s promo suggests ‘Saalon purani reet, baadlegi ab Meet’ and I can’t wait to see this happening. I wish them all the best!”

To watch how Meet breaks these stereotypes, tune into the grand premiere of the show on 23rd August at 7.30 pm, only on Zee TV