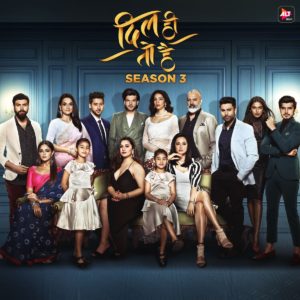 After the resounding success of the first two seasons, ALTBalaji once again embarks on a journey with the most loved family of Noons, to bring us the next chapter in Palak and Ritwik’s life by dropping the trailer of Season 3 of Dil Hi Toh Hai. Featuring Karan Kundrra and Yogita Bihani in the lead roles, the first season ended with Palak and Ritwik’s separation whereas the second season finally gave fans a sigh of relief seeing them both reconcile. But their love couldn’t blossom as destiny had planned something differently, since they met with an accident. With season 2 ending on a ‘not so happy’ note, season 3 will start with a two-year leap post Ritwik’s and Palak’s accident.In these two years, the life of the Noons have undergone a change, with Ritwik, who was the heart of the house, slips into a coma and Palak will be a force in the house to keep them all intact and happy. Without Ritwik she becomes one lifeless soul that affects her daughters. With a lot of twists and turns in the love story of Ritwik and Palak, will Palak and Ritwik find a way back to each other and fall in love again?Speaking on the launch of the third season, Karan Kundrra aka Ritwik Noon said, “It gives me immense pleasure to see how loved Ritvik and Palak’s characters are. The viewers have been with us throughout our journey which started with television and then made its way to ALTBalaji. The last two seasons have been very special to me and I am equally excited for season 3. ‘The Noons’ feel like family now where we love spending time with each other and have a lot of fun together on the sets. I am really looking forward to the new season of the show. I hope we will get as much love and support like we did in the earlier seasons.”The star-cast also includes some of the most loved actors from the Indian television industry –  Rajeshwari Sachdev, Bijay Anand, Paras Kalnawat, Abhinav Kapoor, Paras Arora, Krishna Shetty, Asmita Shetty, Gurpreet Bedi, Sanaya Pithawalla, Poulomi Das, Farida Dadi will also be seen reprising their roles in the captivating series.