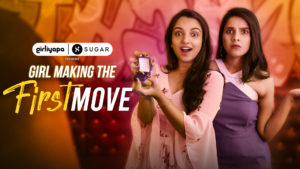 When it comes to who asks whom out, it’s often expected from boys to be thorough gentlemen and make the first move

But in today’s ever-growing progressive world the tables are turning and girls are taking the lead without much hesitation. Rather than waiting for boys to come to them and express their love, they are covering extra miles without giving in to the pressure of being unable to propose or make the first move. Girliyapa, from the house of The Viral Fever, that has time and again broken stereotypes and has come up with the sketch ‘First Move’ which will make people think otherwise when it comes to relationships. Featuring Rashmi Agdekar, Ahsaas Channa and Parikshit Joshi as Kaavya, Richa and Sameer respectively, the sketch, filled with abundance of hilarious moments, is all about Kaavya making the first move and proposing to Sameer, her love interest. The sketch begins on an interesting note where Kaavya tells her best friend Richa about her plan to propose Sameer. This is followed by an engaging conversation between them on how a girl never makes the first move and how in all Bollywood movies, it is always the hero who is after the girl and not the other way around. Commenting on the video, Andhadhun actress and a face of many TVF videos Rashmi Agdekhar said, “There is a stigma around women making the first move. It is often interpreted as desperate or needy, compelling men to make the first move right from introducing themselves, asking for a date to marriage. We have tried to break that stereotype to influence and normalize women making the first move through this video.”Ending altogether on a different note, the sketch in association with SUGAR Cosmetics showcases all the high emotions, clashing thought-processes, rib-tickling instances that will make people roll on the floor with laughter.