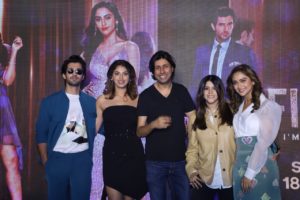 Unveils the Slick Trailer & Takes the Excitement Level to an All-Time High FITTRAT streams from October 18 on ALTBalaji and ZEE5ALTBalaji, which pioneered the trend of original soundtracks in the digital space, unveiled the music album and the trailer of its much-awaited web series ‘FITTRAT’ amidst great excitement and fanfare. The series marks the digital debut of the gorgeous Krystle Dsouza, stunning Anushka Ranjan and the heartthrob Aditya Seal. Actor Krystle D’souza, plays the gold medalist turned gold digger Tarini Bisht. The calm to Tarini’s storm and the yin to Tarini’s yang is Amy, her childhood friend played effortlessly by actor Anushka Ranjan. Joining them is Veer Shergill, the hottest bachelor in town portrayed by the heartthrob Aditya Seal. The posters of the actors from the web-series have built a lot of excitement amongst the fans. Adding to the frenzy, ALTBalaji gave a melodious surprise to all its viewers by releasing four soul-stirring original songs at a musical afternoon. Produced by Ding Entertainment, the web series will stream from October 18, on ALTBalaji and ZEE5.FITTRAT will showcase soul-stirring songs that are sung and composed by some of the most celebrated musicians in the industry. The original tracks ‘O Panchi Re’ by Vivek Hariharan and written by Akshay Shinde; ‘Naznina’ by Altamash Faridi and Jonita Gandhi and written by Mehmood Arafat, ‘Paheli Dilli’ by Sharvi Yadav, Sandman and written by Mani Soni and ‘Manmuradein’ crooned melodiously by Vivek Hariharan and Anusha Hariharan Mani and written by Akshay Shinde will surely win the audience’s heart. The songs composed by music director Sandman and mixed & mastered by Joseph George were launched at this high-octane event which was graced by ‘Content disruptor’ Ekta Kapoor along with Producer Tanveer Bookwala, Director Santosh Singh, the spectacular star cast of FITTRAT. The grand musical afternoon saw the singers lend their voice and give the audiences a live experience of the music, adding the extra dose of melody to the event. While the music mesmerized everyone present, the  trailer of the series gripped everybody’s attention with its slick cinematography, crisp portrayal of characters and the large canvas glamour. The two leading ladies Krystle D’Souza and Anushka Ranjan give us major BFF goals as they play Tarini and Amy respectively.  The handsome hunk, Aditya Seal plays Veer Shergill, the hottest bachelor in town and Amy’s boyfriend and is sure to make the women go weak in their knees with his absolute drop-dead good looks. Tarini finishes her college in Shimla and unites with her childhood best friend Amy in Delhi in the sole pursuit of the richest man to marry. She is only interested in money and seeks Amy’s help to fulfill her ambition. Amy is in a steady relationship with Veer but his prying eyes notice Tarini.  This turn of events greatly affects the girl’s friendship causing misunderstanding and making them stand against each other. Will Tarini and Amy’s childhood friendship win over love? This question makes the web-series an even more interesting watch. With such power-packed performances, FITTRAT not only looks promising but is surely going to be a treat this festive season.