Seems like the buzz around ALTBalaji and ZEE5’s show Bicchoo Ka Khel is not dying anytime soon. Owing to its gripping plot, that’s filled with a whole lot of masala and power-packed performances, audiences have been at the receiving end of a show that has hooked them right from the first scene to the very last.  As per the latest COTT reports, its findings reveal that the web show received the highest number of views amongst all other shows with a resounding figure of 37.66 million unique viewers translating to a reach of 6.56% in COTT Week 48 (November 29 to Dec 5).
With an IMDb ranking of 8.2, the web series made headlines for its performances, storyline and entertaining dialogues. The USP of the show are its dialogues written by Kshitij Roy which resonated so well with the audience that it became viral overnight.  Be it the iconic “Duniya Gol Hai, har paap ka double role hai” or the whistle-worthy “Kumbkaran ke baad agar kise ne acche neend le hai toh wo hai mere kismat”, audiences took little or no time to feel the connect. 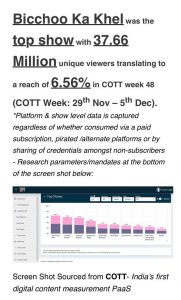 Bicchoo Ka Khel is a crime thriller that revolves around the story of Akhil, a budding writer whose life is nothing less than a roller-coaster ride with twists and turns to keep you at the edge of your seat. The show features a talented star cast that includes the likes of Divyenndu Sharma, Anshul Chauhan, Mukul Chadda, Gagan Anand, Zeishan Quadri, Rajesh Sharma amongst others.

Another show which made it to the list in week 48 is ALTBalaji’s Mum Bhai, a riveting tale on the Mumbai underworld during the 90s that sees friends turn foes as cop and gangster go head-to-head. The series is currently streaming on both the platforms (ALTBalaji & ZEE5).

Other shows featured amongst the most viewed list of the COTT report Week 48 are – A Simple Murder, Aashram Season 2, Bheehad ka Baghi, Brave and Beautiful, Day Dreamer, Endless Love, Scam 1992 and Pariwar.