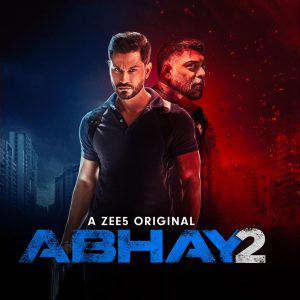 The ultimate face-off begins. All episodes streaming from 29th September

ZEE5 has consistently presented Originals across genres and languages. India’s largest creator of Original content houses some of the most popular crime thriller web series that the country has seen. Abhay being top of the list, a franchise that has won much praise amongst the critics and the audience, back this year with a grittier second season. A gripping storyline with a versatile ensemble cast led by Kunal Kemmu aka Abhay Pratap Singh, the final episodes start streaming from 29th September.The final trailer of the season was out exclusively on HiPi, ZEE5’s popular short video platform.The trailer begins with a glimpse into some of the killers you have seen in previous episodes and some who you will see in the final ones. Fans who cannot wait to watch the face-off between Ram Kapoor, the supervillain with no name and Abhay Pratap Singh will not be disappointed. The voice over tells you that the man behind the Wisdom Public School kidnappings is helping STF to reach the murderers.Ram Kapoor’s character, in his own intimidating style, asks Abhay Pratap Singh to do true justice to the case being discussed. Raghav Juyal’s devious avatar will take you by complete surprise, he is definitely a character to be looked forward to in this final instalment. As you inch closer to the end of the nail-biting trailer, Ram Kapoor is seen demanding what he wants and talks about how to make the world a better place, some people need to be sacrificed. Will Abhay find #TheRoadToJustice? Only time will tell.Kunal Kemmu shares, “I’m thrilled that finally all the episodes are releasing and also thank the audience for enjoying what they have seen of the season so far. Shooting for Abhay2 has been an incredibly satisfying and challenging experience. All the actors have worked hard and delivered their best. The conclusion of the season is surely something that the audience would not want to miss. Block your date for 29th September.”Ram Kapoor shares, “There is no doubt that Abhay 2 has made heads turn. Whether it is the acting, the plot or the way the entire project has turned out. Everyone essaying varied characters, most of them out of their comfort zone (including me), have really tried to put in their best effort to bring this alive. The first 5 episodes have been received well and the final instalment is going to be everything that the audience will not expect. 29th September is not far away. Stay tuned.”Raghav Juyal shares, “I’ve never ever played such a character in my life and the craze of the character comes from a traumatized past and how he gets peace from the revengeful murders. As an actor, this character was quite difficult to portray. I cannot wait to hear the feedback from the audience. All episodes out on ZEE5 on 29th September, the wait is final over!”Watch Abhay 2 #TheRoadToJustice on 29th September, exclusively on ZEE5