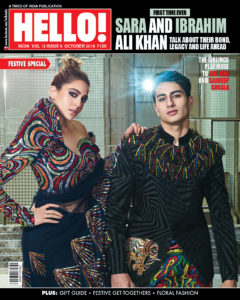 The high-fashion cover shoot, that featured Sara Ali Khan team up for the first time with her brother Ibrahim clocked in over 6.2 Million Interactions  India’s premier lifestyle brand HELLO!  recently featured the famous and talented brother-sister duo Ibrahim Khan and Sara Ali Khan for their October issue, and it took no time for it to spread like wildfire on social media for all the right reasons. The cover interview, which delved into their lives like never before, has piqued curiosity levels among readers. With one of the youngest sibling duos in Bollywood as the face of the magazine, the cover has hit a whooping 2 million views on the social media platform. This is also a first for the dashing and debonair Ibrahim Ali Khan as he made his  exclusive debut on any magazine cover.As soon as the cover page was unveiled on the social media pages of Hello! India, the engagement level on the cover went through the roof as it reached 100 Thousand. Furthermore, Sara Ali Khan shared the pictures of the cover shoot on her Instagram handle that resulted in it gathering an astounding 4 million views.