The recently telecasted episode of Sony Entertainment Television’s singing reality show Indian Idol 12 was seen celebrating festivities with its Ram Navmi special episode. While the contestants added magic with their soulful voice, Yoga guru Swami Ramdev graced the stage, World-famous Indian sand animation artist and storyteller Nitish Bharti definitely stole the show with his sand depictions of different chapters of Ramayana on the screen. Indian Idol judges Neha Kakkar and Vishal Dadlani were all praises for him and gave him a standing ovation. 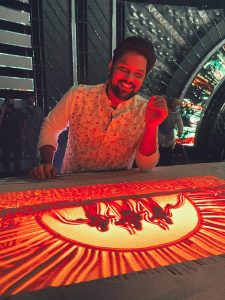 While the top contestants crooned the songs magnifying the festival mood, they narrated the story of Ramleela through their performances. Nitish on the other hand depicted the theme of the episode with his fingers to create wonderful stories out of simple sand grains which were visually appealing on the screen when the contestants were singing. The special guest on the episode Baba Ramdev, judges Neha Kakkar, Vishal Dadlani and Himesh Reshamiya were so amazed with his talent that they gave him a standing ovation. 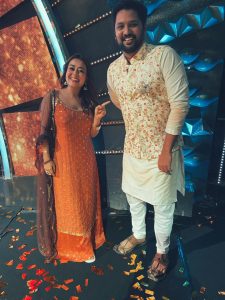 Judge Neha Kakkar said, “The artist behind all these beautiful sand-arts, we all should give a standing ovation to Nitish Bharti.” While judge Vishal Dadlani added, “The way you have carved these beautiful stories into sand-art is unbelievable matching the theme of the song is nothing less than a miracle.”

Nitish Bharti has been a finalist of Indias Got Talent Season 4 and has been a semi-finalist at Asia’s Got Talent where he represented India. His incredible videos have been watched and loved by millions of people globally.