The two-day national seminar was held at Raj Bhavan and Films Division, Mumbai. 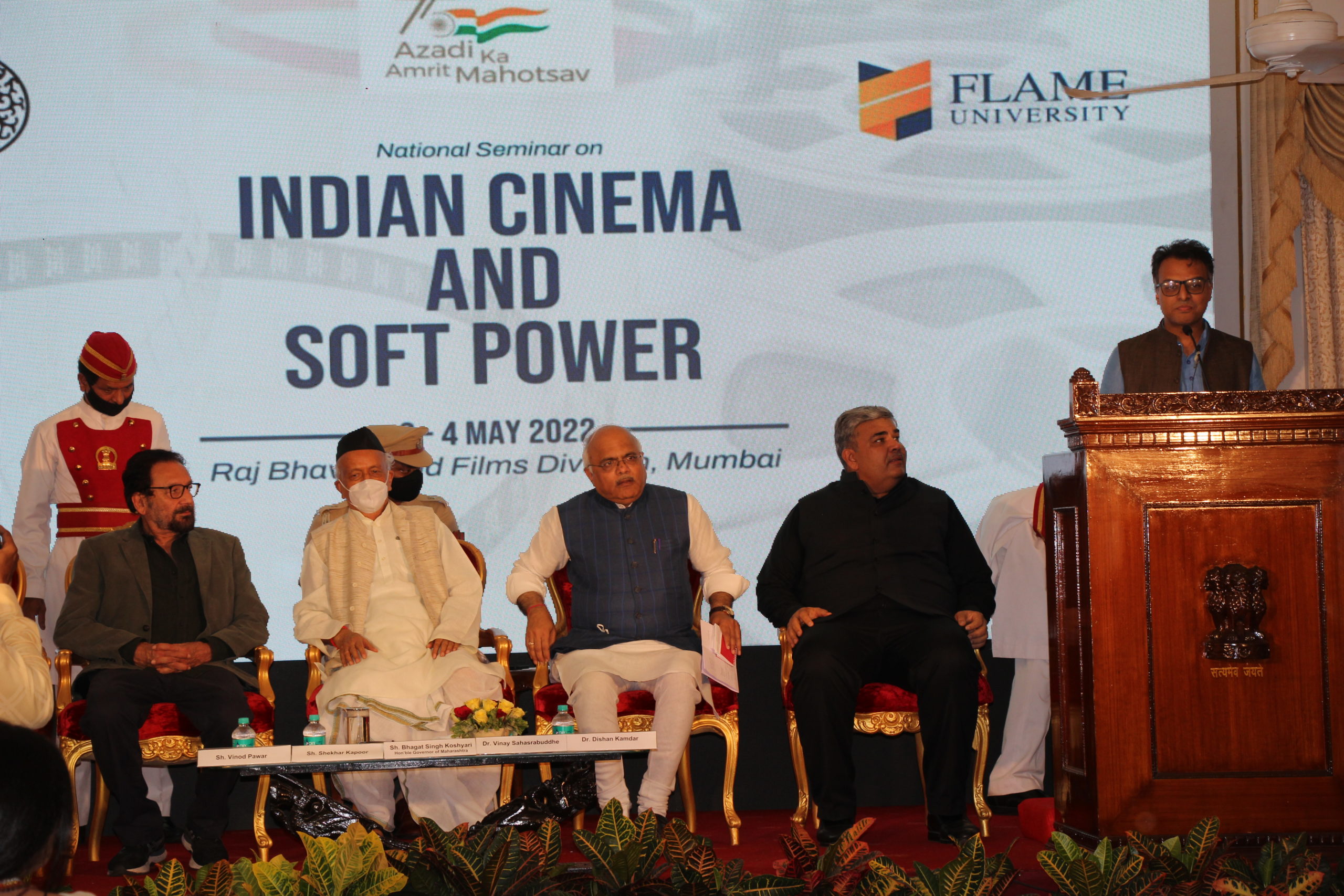 The seminar brought scholars and practitioners of Indian cinema, culture and politics together to deliberate on how cinema can contribute to spreading the idea of India, how Indian cinema can engage with foreign audiences through advanced technology, the global influence of Indian cinematic music, and the importance of regional cinema. The seminar also introduced the concept of cinematic colonialism.

Applauding Indian Cinema, Hon’ble Governor of Maharashtra, Bhagat Singh Koshyari, emphasized that cinema is a creative power and it has a huge impact on people. He mentioned that some people have even learned the Hindi language by watching Hindi cinema. Indian culture has a different place in Indian Cinema and we should foster the culture. He further highlighted that Indian Cinema is equally competent when compared to Hollywood Cinema. It is important to see what we are offering to society through cinema. There are many epic tales like Mahabharat and Ramayan that have created great value.

Dr. Vinay Sahasrabuddhe, Rajya Sabha MP, and President, ICCR, said that this is the first time that the Indian Cinema and Soft Power topic is being discussed. In his speech, he appreciated that people from 10 different cities came together and showed their interest to attend the seminar. He mentioned that ICCR will definitely play a role in the road ahead after this seminar, and will also help the regional cinema groups if they approach ICCR. He highlighted that ICCR will propose a special category of soft power promotion friendly film awards for the films that are promoting India’s soft power in film festivals. He further mentioned that ICCR will also soon organize a national seminar on foreign language training in India and soft power because many countries have complained that they are unable to watch popular Indian movies because the subtitles are not in their languages. ICCR, along with FLAME University or any other institution would like to organize and offer an appreciation of Indian films program that can be imparted physically or virtually that will help to enhance the understanding of Indian films. ICCR and Flame University, after this seminar will seek everyone’s help to call a global forum against cinematic colonialism.

Shri. Shekhar Kapoor, Filmmaker, said that if we look at the consumption of content, the generation today consumes content mainly through the internet and mostly consumed from YouTube and even games – that is what we should be looking at. This is the generation we need to capture if we want power. In India, there is no dearth of stories, and with modern technology, this is our chance. Gaming is one of the biggest content consumed in the world. We need to upgrade ourselves. We need to give our youth the ability to create and compete with technology in gaming and in everything that can influence people. Comparing China with India, he said China makes huge investments to advance its culture through its cinema. China built around 85,000 theatres to give its filmmakers power. China gave the power to its filmmakers to play the cinema in a lot of theatres. They changed Hollywood by deploying their people in Hollywood cinema. What we need in India is technology and the understanding.

Shri. Anurag Thakur, Hon’ble Union Minister for Information & Broadcasting, Sports and Youth Affairs, said that Indian Cinema contributes to the nation’s branding. It is very important for the promotion of Indian values globally, as well as, for us to promote public-private partnerships within India to help grow the cinema industry in the country. I am sure these kinds of interactions and deliberations can contribute to the future, and help further build the strength of the nation through Indian Cinema.

Prof. Yugank Goyal, Associate Professor – Public Policy, FLAME University said, “We believe that there is a need for recognizing India as a living inventory of culture and stories which remain unheard or untapped. The government should play a pivotal role in creating the larger discourse on soft power through Indian Cinema. In fact, the government’s proposal to carve out a Model Film Policy, to help filmmakers in ‘ease of filming’ is a direct entry point for this conversation in the policy world.”

FLAME University and ICCR together aim to have an evolving plan of action for the future, basis the discussions in the seminar. The Report of the seminar is likely to be presented to the relevant departments and ministries in the government.