Starring alongside Colonel Sanders, this one’s bound to be “Soooper very very!”

National, Everybody loves a dash of spice – in their food and in mundane life situations. But getting the spice right – not a tad bit more or under – is almost an art. We’ve all been in situations when it’s either a case of uncontrollable tears or something that’s left you craving for that just a little more spice. Not just us, but Superstar Allu Arjun echoes the same feelings. Having struggled with finding the ‘right spice’, in KFC’s new film he is seen defiantly declaring “Apun ko aansu acha nahi lagta hai, na emotion wala, na mirchi wala”. His search ends here and how. With KFC’s Peri Peri Chicken, Allu loses himself in the crispy, crunchy, spicy new offering, with the OG Colonel Sanders by his side. The latest KFC film with Allu and the Colonel is out now and has Allu & KFC fans raving over it already. Watch the blockbuster film here.

On bringing together 2 OG stars – the Colonel and Allu – for the biggest launch of the season, a KFC India spokesperson said, “We Indians have an innate knack for all things spice. And when the spice either is such that it makes you tear up or leaves you underwhelmed, it is disappointing. So, who better than KFC along with the superstar himself – Allu Arjun – to present a product with just the right spice! Our latest launch of Peri Peri Chicken has all the makings of a blockbuster – it’s crispy, crunchy, with a dash of spice! With Colonel Sanders and Allu Arjun turning up the heat, this latest KFC film is nothing but soooper very very!”

Talking about the film, Ritu Sharda, Chief Creative Officer North, Ogilvy, said “Peri Peri, as a flavour is already a hit. But when we tasted KFC’s Peri Peri, we realised it was something extra special. We were confident people were going to find this bigger than a hit, it was going to be a superhit. And who better to get a nod of approval on anything super hit, than Allu Arjun. So, we turned the tasting session into a dramatic ad, with all the bells and whistles and ended it with our Colonel Sanders finishing off with Allu’s signature move.”

Talking about his latest KFC film, Allu Arjun said, “It was great collaborating for KFC’s Peri Peri campaign. Coming together with the OG Colonel Sanders for their new irresistible peri peri sprinkle has been a lovely experience altogether. All I can say is, “Chicken Peri Peri, soooper very very!” 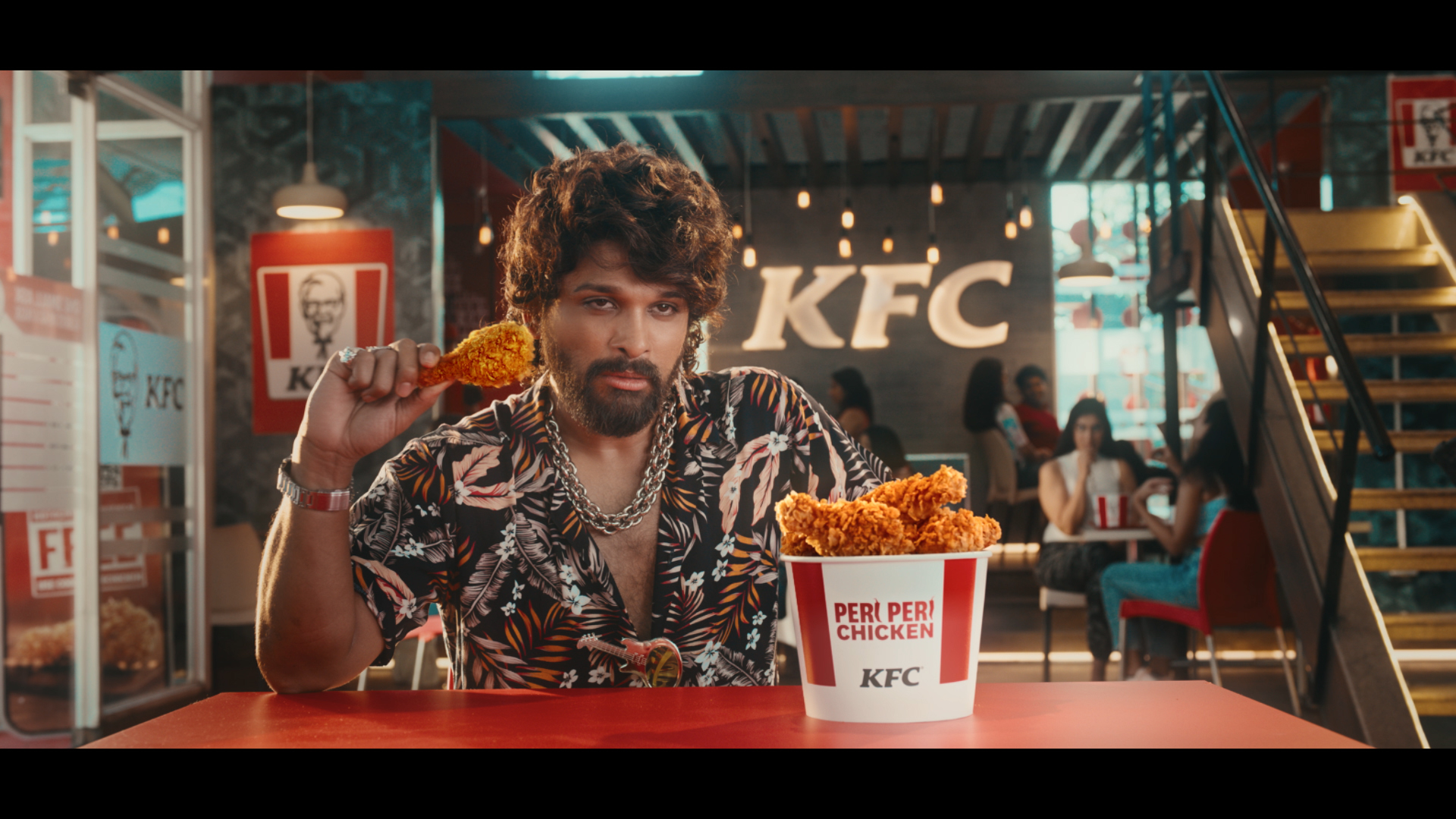 The film opens on Allu Arjun, in his suave demeanor at a KFC restaurant, in a drool-worthy close of him biting into the new KFC Peri Peri Chicken, as we are treated to a glimpse of that Peri Peri flavouring over a piece of perfectly crispy chicken. He continues to enjoy that discerning bite when he declares in his signature style – Apun ko aansu acha nahi lagta hai, na emotion wala, na mirchi wala. We feel the tension rising as he asks for the Colonel. It’s nothing less than an edge of the seat thriller as a perplexed Colonel walks up to him, eagerly awaiting Allu Arjun’s verdict on the product is. “Spice…” says Allu Arjun, followed by a dramatic pause, only to declare “Correct hai boss!” Celebrations ensue as Allu Arjun assures that KFC Peri Peri is “soooper very very” and the Colonel joins in imitating Allu Arjun’s signature Pushpa step.