ALTBalaji seems to have got the Midas’ touch. After two massive hits in a row with Broken but Beautiful 3, Puncch Beat 2, the streaming platform is all set for another blockbuster. Their recent release Cartel has been making the wave not just amongst the masses but also among critics.

We recently watched the thriller entertainment and here’s what we think of the series. As the genre suggests, Cartel is an entertaining thriller. The story is about a fictional family – The Angres, who rule the city and are touted as the first family of Mumbai. When the head of the family – Rani Maai, played by the versatile Supriya Pathak, faces a fatal attack, the world of the Angres and other cartels turns upside down. Her three successors – Abhay Angre (Rithvik Dhanjani), Madhu Angre (Jitendra Joshi), and Major Bhau (Tanuj Virwani) take the mantle of the business ahead. Talented actors Rithvik, Jitendra, and Tanuj bring the three brothers like chalk and cheese characters alive. Apart from these three, the Angre ménage and other cartel members support the series so that you get absorbed in the Cartel world. 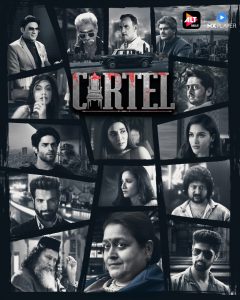 Cartel, at its core, is a family drama. It’s all about the family, albeit set in a world that no family ever wants to be connected to. Through the story, the director takes us through the underbelly of the crime world, creating thriller entertainment. We are exposed to the dark realities of cartels’ existence. Supporting his vision, the cinematographer and production designer does an admirable job. From precise locations to grim visuals endorsing the stark reality, both the departments become the wheel to the director’s vision.

Coming to the writing of the show, it is a gripping story. Although dialogues are overtly filmy, the makers never promised it to be a realistic drama. It is an unabashed potboiler masala drama and the writers have written the material keeping that in mind. Dialogues such as “Angre toh Angre hai, maarega ya marega”, “Desh ki goli sirf desh ke liye chalti hai,” corroborate the same. The background score amps up the emotions. Especially in the scene where Rani Maai is bed-ridden and Madhu, breaks down, the background music has been beautifully woven.

In a nutshell, Cartel is something you definitely can’t miss. Binged.com has ranked it as one of the most anticipated series of 2021. Furthermore, just within days of its release, the series is already with 9.5 ratings at IMDb.  It is one of the highest ratings for a digital series in the current times, upholding that the show is already a huge hit. With its increasing popularity, it has been featured on the fourth position on Mediabrief – Chrome OTT’s Top 10 shows and Top 10 binged shows in Week 33 of 2021 (15th Aug – 21st Aug ’21), calculated within a day from the launch.