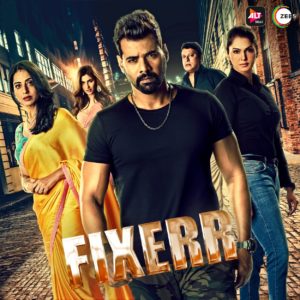 6 episodes out of 12, of this action-packed drama, are now streaming on ALTBalaji and ZEE5With back to back hits, ALTBalaji and ZEE5 now launched ‘FIXERR’,  a thriller filled with mystery, action and drama. The series revolves around the twisted life of Jaiveer Maalik, played by the handsome hunk Shabir Ahluwalia, who is an honest police officer and a super cop in Delhi. The story takes you through the life of Jaiveer Maalik, a super cop from Delhi who gets suspended from his job and becomes the biggest Fixerr in the city of Mumbai. With each case that he fixes, he earns money but also a lot of enemies. Spanning over 12 episodes, watch how he unravels every mystery and fixes everyone’s issues in time before it’s too late but is he able to fix his own life? Produced by Sakett Saawhney ( EKOMKAR Pictures)  and directed by the popular Bollywood movie director Soham Shah, it includes an impressive ensemble cast of Isha Koppikar, Mahie Gill, Tigmanshu Dhulia, Varun Badola, Karishma Sharma, Anshuman Malhotra, Anil Dhawan.The story revolves around an ATS officer, Jaiveer Maalik, from Delhi, who is drawn into the murky underbelly of the Mumbai movie mafia and industrialists. On the other hand, Maalik’s wife Surekha, played by the gorgeous Mahie Gill, is a loving wife and is always worried about her husband’s life and arranges ‘Maata ki Chowki’ or ‘Jagrata’ quite often at her home. The web-series also marks the debut of Shabir Ahluwalia aka FIXERR and actress Isha Koppikar playing sub-inspector Jayanti Javdekar, Maalik’s partner in crime and his right hand. His life takes an unpredictable turn when he gets suspended for a failed encounter. Maalik’s journey is far from a smooth ride as it involves the enemies he makes with every fix, his relationship with a film actress, his aspiring actor brother who ends up becoming a drug addict and lastly, the strains in his married life.