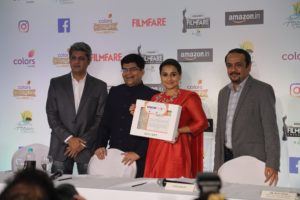 Reaching out to millions of Bollywood fans, the awards show will be simulcast on Facebook, in addition to videos, photos and moments from Filmfare Awards 2020 being available exclusively on Facebook and Instagram

The iconic Filmfare awards are back yet again to celebrate the finest of Bollywood with its 65th Amazon Filmfare Awards 2020. With a legacy lasting more than six decades, the illustrious awards were announced by the versatile and stunning Vidya Balan along with Mr. Deepak Lamba — CEO of Worldwide Media, Mr. Jitesh Pillaai —Editor of Filmfare and Ravi Desai, Director, Mass and Brand Marketing, Amazon India. This momentous occasion also marks a new milestone for ‘The Black Lady’ as the awards, for the first time in their history will be held outside Mumbai and will instead bring the incredible talent of the Indian film industry to the state of Assam. The ceremony commenced with all the luminaries lighting a lamp to mark this new and magnificent journey. The glamorous extravaganza is slated to be held on 15th February, 2020 at the Indira Gandhi Athletic Stadium, Sarusajai, Guwahati. 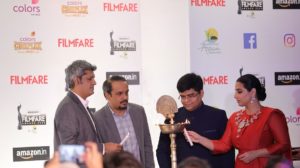 Staying ahead of the curve, Filmfare will harness the massive global reach of social media. For the first time, millions of Bollywood fans all over the world can not only witness the awards simulcast on Facebook but also engage with the best of Filmfare Awards content through the year – From magical moments to stellar speeches and mesmerising performances. Truly embracing the digital way, for the first time the awards will be simulcasted on @Filmfare on Facebook and Instagram, allowing millions of Bollywood fans across the world to witness the country’s most-glamourous property in real time. The Filmfare Awards for the first time ever be telecasted 24 hours after the event on Colors on 16th February at 9 PM and consecutively on Colors Cineplex. Another inclusion to this list is Awesome Assam who have been roped in as the official Destination partner. The gala evening will once again witness the biggest names in Bollywood in attendance be lauded for their dedication and performances. The dynamic duo of the sassy Karan Johar and the charming Vicky Kaushal will host the night and look to leave the audience in splits with their camaraderie, timely banter and funny anecdotes. Ranveer Singh, Ranbir Kapoor, Alia Bhatt, Varun Dhawan and many more glitteratis will light up the stage again this year with their electrifying performances.