The art-deco theatre’s foyer was converted to welcome the new release’s cast and crew to a night with celebrity guests and industry professionals. The palpable excitement beforehand simmered until the attendees walked down the red carpet, following a crimson road from the safety of the member’s lounge to the abject terrors about to be projected for them like a herde of giddy Dorothys.

The celebrity guests – including Ameet Chana (Bend it like Beckham), Bikram Joshi (Hello Jindagi) and producers Firuzi Khan (Houseful 4) and Manmord Sidhu (Best of Luck) – were not spared from the onslaught of shocks the film provided, but the overwhelmingly supportive atmosphere at the end of the screening and reactions given to B4U press afterwards suggested that the shaken crowd were leaving satisfied. 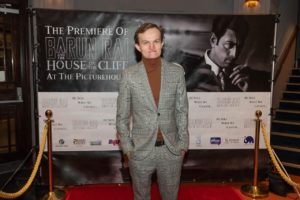 The period film has the hallmarks of classic British folk horror; the rural setting befits Hammer era films or The Wicker Man, while the plot takes the ghost stories of MR James and updates them for a contemporary, international audience. What sets Barun Rai aside from the melting pot of influences is the character’s perspective: Indian protagonists facing an unwelcoming new home calling upon the help of an Indian investigator. Such a character would typically be a caucasian Catholic priest, medium or scientist.

Barun Rai and The House on the Cliff is in U.K. cinemas from the 29th October.