The launch took place here in Hyderabad, on Wednesday 24th of November. This will be SS
productions’s maiden venture in Telugu, after making two successful films in their native Punjabi and Hindi language.
Moviemaxx, a noted distributor in Telugu Film Industry,has partnered with Shiwani Sokhey for this venture. 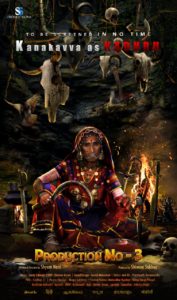 Moviemaxx is known for distributing various Tamil blockbusters into TFI, like Chandramukhi, Aparichithudu, 7th sense and Shivaputhrudu.Their previous big ticket venture was Maro in 2011, with Actor Nithin as the main lead.Along with the announcement of the project, the team has started recording the promo song for the film, which will be composed by Music Director

Sandy Addanki of “Killing Veerappan” fame, Sandy Addanki, who has composed back ground scores for various big films is helming the music and BGM of the film. The first single is about to
be released shortly.

An upcoming ad- film maker Shyam Nani is getting introduced as Director in TFI, with this project. The project is presently in pre-production stage and the makers said the cast and crew details will be revealed soon