In the last few months Star Bharat has entertaining its viewers with their new launches right from bringing in Tera Mera Saath Rahe to their recently launched mythological show Haathi Ghoda Paal Ki Jai Kanhaiya Laal Ki. Adding to their bouquet of entertaining content – the channel is now gearing up to bring the season 2 of the viewers all time popular and favorite show Sasural Genda Phool 2.

Yes you heard it right!

After a delightful season one, the fun filled show ‘Sasural Genda Phool’ is back with its second edition Produced by Ravi Ojha Production Enterprises ‘Sasural Genda Phool 2’, which will air on the heartlands favorite channel Star Bharat. The first season being such a huge success, the makers of the show are back with a heavy duty cast delivering another explosive season. 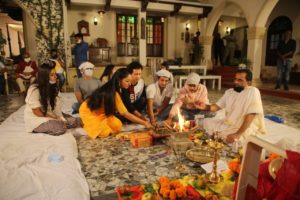 As the starting date of the shoot knocks at the door, the whole ‘Sasural Genda Phool 2’ team is filled with much zest and positivity. To ensure a great start to the season, the entire Production House along with the star cast were present for a Puja Ceremony to thank the almighty and pray to him before they commence the shoots of the show. The cast and crew are all very much looking forward to the commencement of the shoot. The show casts some eminent personalities from the television industry such as actor Jay Soni who has also previously been a part of the show, playing the lead, then we have the evergreen actress Supriya Pilgaonkar, so on and so forth. There have also been some new additions to the cast like actress Shagun Sharma, who is just what the already epic show needed!

Commenting on the show, actor Jay Soni says, “The show has done so much for me as a person when I first played Ishaan that I absolutely had to say yes the second time I was asked to be on the show, without an ounce of doubt. I am happy this call was taken and the show is coming back on your television. Being on the show once again is like going down the happy memory lane. Bringing the same character to life once again for the audience to love it just as they did the first time is not an easy task but, the character brings such happiness and positivity to my life, being the way it is written, I would any day want to give it my best shot as many times as I get the honour to. Playing Ishaan again is extremely nostalgic and I am genuinely looking forward to the audiences’ love for the show as it is a story that has and will definitely touch hearts”.

The beautiful actress Shagun Sharma adds, “I am on the ninth cloud to have had this opportunity presented to me. Working with Star Bharat is an honour in itself but to also be able to be the new addition to an already hit show is just like the cherry on the top. As soon as I was handed the script, I knew I wanted to be a part of it. The whole setting of the show is so sweet and innocent that reading the script immediately lit me up and there was no looking back from there on. Evidently, I am very thankful and tremendously thrilled to get the ball rolling and I am pretty sure, so are our audiences. Hoping to receive a lot of love and good wishes along the way”.

The shoot for the show is about to get off the ground and we have only and only love and good wishes for the team on the occasion.