The inaugural ceremony held through video conferencing was attended by thousands of people from across the globe as history was created with the operationalisation of India’s first ever driverless train. Apart from senior dignitaries from the Central Government and the Government of the NCT of Delhi, the event was also witnessed online by HE Ambassador of Japan to India, Mr. Satoshi SUZUKI. Senior dignitaries from Japan International Cooperation Agency (JICA), from Tokyo and Delhi also witnessed the event online. 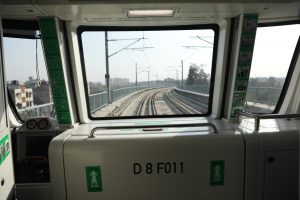 With the launch of these fully automated Driverless Train operations (DTO), India enters into the elite league of few countries having this facility in their Metro system. The fully automated trains will reduce human intervention in operations and offer more reliability and safety for the commuters. This system also brings more flexibility in trains in operation. As a result, the number of trains in service can be regulated based on demand dynamically without any dependence on availability of crew. Since these trains operate on communication based train control (signalling) system, they can be run with a headway as high as 90 seconds to offer more carrying capacity.

In DTO, initially, the train operator will be present in the train to instil a sense of confidence and assistance. DTO’s higher level of diagnostic features will help move from conventional Time Based Maintenance to Condition Based Maintenance. This will also reduce maintenance down time of trains.

The NCMC service enables passengers from any part of the country travelling on the Delhi Metro’s Airport Express Line to use their NCMC compliant RuPay debit card for seamless travel. The same card can also be used for shopping, banking transactions etc. across the country. DMRC’s system will be able to accept transactions from 23 banks through the RuPay debit card issued by them.

DMRC is planning to similarly upgrade its entire existing network by 2022 to facilitate the travel by this NCMC compliant Rupay Debit card. The existing Delhi Metro smart cards, tokens (currently not in use due to Covid 19 pandemic), QR Codes, etc., will also continue to remain in use. In addition, all upcoming corridors of Phase-IV will also be built with NCMC compliant Automatic Fare Collection (AFC) system at the stations.