Forever entertaining kids with their humorous adventures, the cat duo Honey Bunny are all set to welcome the comedy king Kapil Sharma into their animated world and make him a part of their Jholmaal-crazy adventures with their series of minisodes ‘The Honey Bunny Show with Kapil Sharma’ starting 12th October only on Sony YAY! Having delighted audiences in his popular chat show ‘The Kapil Sharma Show’, one can’t wait to see the comedy riot as he teams up with the hilarious cat jodi and leave everyone in splits.While they may belong to two separate worlds, what binds Kapil Sharma and Honey-Bunny is that they are all about fun, friendship and laughter that’s all set to be taken to the next level in this new show. Read on to know few fabulous things that Kapil Sharma and Honey-Bunny Have in common 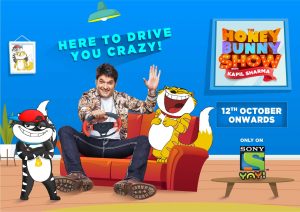 1)    They both have the coolest gang
You can’t be the King of Comedy if you don’t have a cool squad by your side. That certainly holds true for both Honey-Bunny, who have Ms. Katkar, Popat and Zordaar as part of their masti-filled adventures, while Kapil Sharma has a team of comic characters who always leaves the audience in splits with their antics.

2)    Yes, they’re funny. And also very ‘Punny’
Talk about Sony YAY! presenting fans with the ultimate comedy jester. Do you see what we did there? That’s how fun puns can be. When it comes to the kings of the pun game, there’s no one better than Honey-Bunny and Kapil Sharma on their respective shows. You’ll see just how good their wordplay game is as they bring their pun game to the party on the show.

3)    They are the ultimate Jholars
With mischief and pranks forever being on their mind, there’s no prize for guessing that Honey-Bunny and Kapil Sharma are ultimate Jholars in town. When these three come together, what you get is them pulling each other’s leg that is banter at its very best.

4)    Kid’s favourite
The hilarious feline duo of Honey and Bunny, where Honey is the goofy one and Bunny is a smart prankster, both have earned a very special place in the lives of their young fans. Similarly, Kapil Sharma is a real master in cracking jokes with a poker face and a naughty smile for he knows how to hit the right chord with everyone alike including kids.