Finally … it’s here!! After over-the-top drama, over-the-top controversies, and anticipation on who will win the title of Bigg Boss OTT for the first time…the Dhamakedar season has come to an end. Well, and NOW we have a winner and it’s none other than Divya Agarwal. Post facing a lot of criticism and standing tall as a wall in the house from day 1, the reality queen, Divya Agarwal looked splendid in a short dress and was shocked when her name was announced as the winner of Bigg Boss OTT beating Nishant Bhat in the race. 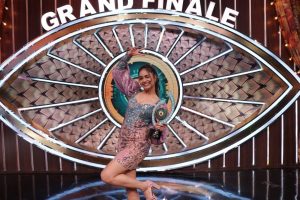 From entering the house without a connection to losing the connection during the journey because of physical fight, Divya Agarwal played well and her strategy worked phenomenally and won millions of hearts through her journey in the season. While she was not liked and loved by all inside the house, her fans and audience never stopped loving her! They decided to support her till the very end. Divya not only fought with the contestants but also fought with the sassiest host, Karan Johar and raised her opinions very boldly. Divya was outspoken with her views which created a lot of fan base and was also trending each day. She was one of the contestants who was creating headlines, whether it’s fights with Shamita Shetty or her bond with Raqesh Bapat. Her journey in-the-house was a roller coaster but when KJo announced her as winner she was over-the-top happy and grateful.