Two men shipwrecked together on a desert island, The Great Escapists is the story of Richard Hammond (The Grand Tour) and Tory Belleci (Mythbusters), (arguably) two of pop-science TV’s greatest minds, with nothing but their smarts and their scrap shipwreck for survival. Can they invent themselves off the island? Or will they be castaway forever? This is the engineering challenge of their lives, will they succeed and become THE GREAT ESCAPISTS?

One afternoon Richard and Tory, on a fishing adventure inadvertently venture into deep waters… just as the storm of the century closes in. Blown hundreds of miles off course they crash land on a deserted island. 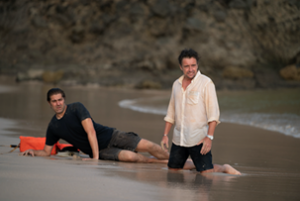 Alive but with a boat beyond repair, Tory and Richard quickly realise that the boat’s components could become key to their survival and ultimate escape. Surrounded by deadly currents and tides, a makeshift raft would be suicide, so rather than waiting to be rescued, the pair decide to take matters into their own hands. They use all of their engineering and expert scientific prowess. Tory is hellbent on building as many distress signals and machines to get them off the island as possible. Richard – although supportive of Tory – decides to instead focus on building things that make their lives more fun and comfortable.