The entire nation cheered for them, supported them in every step of the show, laughed, cried and experienced every emotion with them for 100 + days and now the most exhilarating journey of COLORS’ biggest reality show Bigg Boss 14 has reached its pinnacle and concluded tonight.The show unleashed exceptional drama, entertainment and saw many popular contestants fight tooth and nail to win the battle.Giving everyone stiff competition and overcoming all odds, Rubina Dilaik emerged as the ultimate winner and was conferred with a trophy and prize money of INR 36 lakhs. 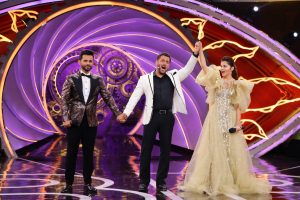 Host Salman Khan in his best element turned the Grand Finale into a memorable one as he welcomed a volley of guests including Ritiesh Deshmukh, Veteran star Dharmendra, Nora Fatehi, Dance Deewane judges and host Tushar Kalia, Dharmesh Yelande and Raghav Juyal respectively. The evening was nothing short of an entertainment extravaganza marked by some fun acts, fiery dance performances and guest interactions.

With a strained relationship to fix, an uncharted path to conquer and unceasing support from her fans, Rubina Dilaik entered the Bigg Boss house with her real-life husband Abhinav Shukla. In the first week itself, Rubina had to face the brunt of the house and its rules as she was rejected by the seniors and made to stay in the garden area for more than a week. But she kept her spirits high at all times and fearlessly performed every task. Rubina voiced her opinion and always spoke her mind that gathered her a lot of haters but like a true fighter, she continued to play  with  utmost dignity and emerged as a strong person. She was often met with criticism for being influenced by Abhinav and for not playing a real game, but she did not let others’ fury bog her down and in due course was seen as a tough competitor by everyone.

Despite being accompanied by her huband, Rubina played an individual game and established her own place in the house. On the brink of divorce with her husband, Rubina fearlessly opened up about every aspect of her relationship and her perseverance and dedication she came out of it stronger. Rubina was constantly pulled down by Rahul on several occasions but this didn’t demotivate her. She had her set of ups and downs with Jasmine, Nikki and Rakhi Sawant too but she weathered to emerge as a winner.

Talking about her victory, Rubina said, “No amount of prep-work, mental strength or advice from former contestants or winners can actually get you ready for life inside the Bigg Boss house. Not only me, but I am certain almost everyone will agree to this. This house can make you or break you and I am glad that I mustered the strength to power through it all. Winning, finally, has left me speechless, filled with so much emotion as I not only walk out of this house as a winner but also with a renewed relationship with my husband.  I would want to thank my family, friends, fans,  COLORS, Endemol and moreover Salman Khan for being my guiding light in this incredible journey.”