Taking on this musical journey, is India’s singing sensation Neeti Mohan ,who lends her voice to the Hindi-dubbed version of the popular franchise

While the year has trolled each one of us in style, saving the best for the last, ‘Trolls World Tour’ is all set to take over the theatres with the much-awaited English and Hindi edition! Ending 2020 on a great note for Indian audiences, the popular animated musical comedy  is set to release on November 19 across theatres in the country. With theatres now upon, cinephiles are set to see one of the biggest animated movies of the year on the big screen. Making the experience one to remember for fans of the popular franchise by striking the right note, the film will feature India’s musical and singing sensation – Neeti Mohan lending her voice to the lead character – Poppy in the second installment of this fun and adventure filled animated movie. With Anna Kendrick regaling audiences in the English version of the film, Neeti Mohan is ready to blow us all away with three songs for the film:

Commenting on her lending her voice to such a widely-acclaimed animated film, singer Neeti Mohan said “Poppy sends across the message that every girl is a queen. Poppy is a free-spirited soul who is a ‘go getter’ and the character inspires it’s audiences to a great extent. Which is why getting the chance to be ‘Poppy Mohan’ was one of the best things of all time if you ask me. With music being such an integral part of the narrative, a movie like Trolls ranks amongst my most-favorite films. Speaking about the dubbing experience, it’s not easy to translate songs or dialogues to another language. Despite that, I had a blast recording those three songs and I feel that this is an experience that’s going to last forever. With the movie all set to release in theatres, cinephiles couldn’t have asked for a better musical treat to mark their return to the cinemas.” 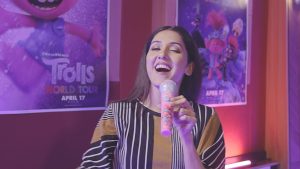 Commenting on Trolls: World Tour, Nitin Bikhchandani, General Manager, NBCUniversal Media LLC, said, “Owing to its prominent elements of comedy and music, Trolls: World Tour is a special movie, especially for the Indian market. The first part of the movie was received with great response from the audiences and the second part promises to be even grander. Having an established name like Neeti Mohan come forward to voice the character of Poppy has indeed raised the bar with respect to the experience that the movie aims to offer viewers in India. Fans of the franchise have been waiting for this moment for months and all that I can say is that the film has been worth the wait.”

Trolls World Tour will launch in your nearest theaters on November 19, 2020 in 2D, IMAX and 4DX. It is directed by Walt Dohrn, who served as co-director on Trolls and is produced by returning producer Gina Shay. The film is co-directed by David P. Smith and co-produced by Kelly Cooney Cilella, both of whom worked on the first Trolls.