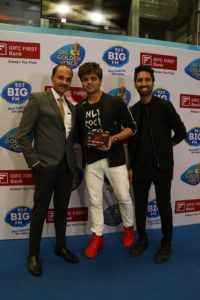 92.7 BIG FM —one of the biggest networks in the country, that is known for bringing the best of the entertainment to the fans and followers, has announced the 7th season of its most-prestigious property ‘BIG Golden Voice’. The on-air singing reality show has received a lot of praises in its previous seasons from the industry owing to its unique format and approach that provides a platform to a host of rising and upcoming talent. Further adding to its exceptionality, the show, this time, will feature talented singer and music composer, the hit machine Himesh Reshammiya as a celebrity judge who will also be seen mentoring the participants in their journey as they battle for the most-coveted title.
The singer, who was present at the launch of the show, was seen engaging with RJ Abhilash reminiscing about his Bollywood journey starting from being a producer to becoming a music sensation. He further talked about the talent hunt, its popularity across music lovers and joining the platform as a celebrity judge. The talent hunt garners larger numbers of participants from all across the country giving budding singers a platform to showcase their talent. The contestants are then selected through multiple rounds, with the local station-level auditions taking place first to select city-wide winners. While the original format of the show was “TOP 10”, this year, listeners will witness a major change in the current format as everything will become ‘Top 7’ as a part of the IDFC First Bank integration.
Commenting on being a judge of the popular talent hunt, hit machine Himesh Reshammiya said, “I am delighted to be on board for this prestigious property brought in by 92.7 BIG FM. I have always been in support of platforms that encourage people to showcase their talent. Through ‘Big Golden Voice’, I look forward to some extraordinary performances and a great musical experience. With the thematic change of ‘Top 7’ contestants, I am sure the competition will be tougher taking the fun and frenzy even higher.”
The journey on Season 7 promises nothing less than a heavy dose of entertainment for participants as well as listeners across platforms of 92.7 BIG FM. Big Golden Voice has had an impressive line of esteemed judges, that include Abhijeet Bhattacharya (Season 1), Shankar Mahadevan (Season 2 & 3), Malik Brothers – Armaan and Amaal (Season 4), Anu Malik (Season 5) and Sonu Nigam (Season 6) among others, who have not only amplified the show’s popularity but have also played an essential role in recognizing the best talent for the industry at large.